SPECIAL OFFERS | REVIEWS | IN AND AROUND | EVENTS | FOTO | NEWS |
THE VELATE TOWER OF VARESE:

THE VELATE TOWER OF VARESE 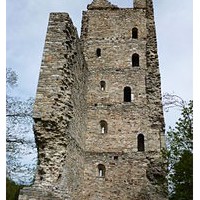 Velate is a fortified village dating back to the Tardoromanian age ("castrum de Vellate"), there is a medieval tower from the eleventh century.
The Velate Tower is located in the ancient defensive structure of the Prealpine Limes, and was destined for military guarding of the underlying road to Angera and Lake Maggiore.
The stone-framed structure, with a quadrangular plant, reaches 33.5 meters high, with five ground floors served by an articulated staircase on the eastern side.
The mighty fortress, of which only two sides remain, and only one fully preserved, was severely damaged at the end of the twelfth century by the victorious militants of the imperial militaries and allies of Barbarossa, including the nobles of Velate.

Currently, the tower, which is a steady spot in the hilly landscape of Varese, is the property of the Italian Environment Fund. It is located in Velate, a hamlet of Varese.

THE VELATE TOWER OF VARESE